Welcome!
I am Amarilis.

I work to give customers an experience where they can perform complex tasks in a simple and intuitive way using an online tool.

I am a solution designer that improve customer experience. I mainly work analyzing, planning, structuring, prototyping and testing solutions whose processes are mostly online as applications and systems always thinking about the user experience, the resolution of problems and satisfaction that the created solution will provide to the customer.

To accomplish my work I count on experiences and studies that come from different areas like UX, UI, Web Design, Front End, Quality Assurance, Communication and Marketing.

By providing services to Startups, I have planned, structured and prototyped solutions for unprecedented business ideas. In e-commerce, I have provided greater conversion through analyzing and creating solutions and better design improving the user experience in online stores.

Also, throughout my career, I have helped clients by offering web consulting and delivering complete online communication solutions such as website development or e-commerce, SEO, social media as well as graphic and logo design. 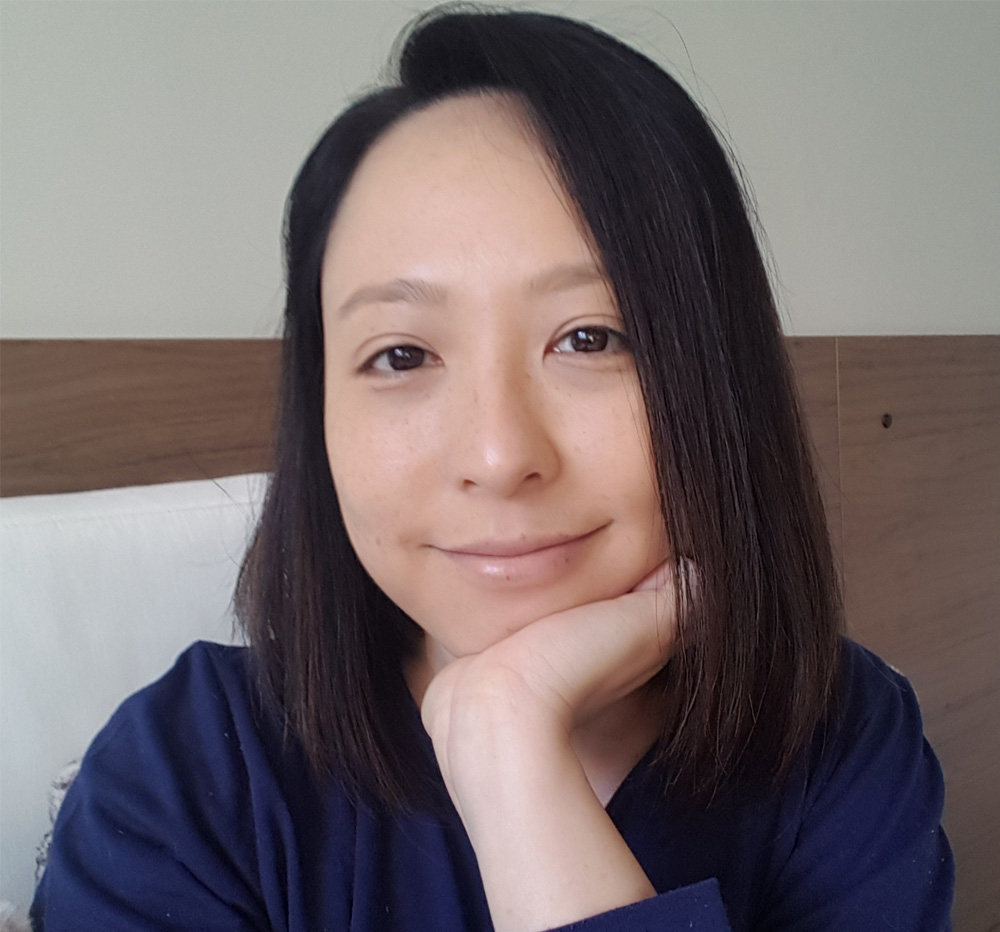 Minhas audiências is a system built mainly for Law firms and lawyers that hires representative in other states. Nothing like it existed before its creation. The company detected a great opportunity and hire me to deliver the project. My role was to build the process and the interface needed to achieve every step.

There were many challenges along the way, specially because all the process at the time were made manually and differently by law firms across the country. It was necessary to create a digital online system with processes that resembles the way contracts were already being made. With the help of the company to rise information about all the aspects involved, I found a common ground to build this complex process.

To hire a representative, law firms need to negotiate prices for specific services. Prices could change not only based on the nature of the service and is peculiarities but also based on what state and city it had to be done. We had to list all possible services and their possible modifiers to find main bases for automatization.

Obviously, negotiation was still necessary, but we created a system that begin contract process with a first offer from the hirer lawyer firm detailing all what's needed to execute the service. Representatives could respond with a counter offer in exchange to close the deal.

The system needed to have ways to allow hirers and representatives to communicate not only for negotiation of prices but also for updates or important information of on going services at any time.

Since the law representative would always be at justice forums to execute the services, the chat tab was built thinking in mobile devices. Whatsapp was the great inspiration to design it.

It's common for law firms needing a lot of representatives in many states and cities for different services at the same time. So I had to design a way to manage all the contracts, informing their status, last messages, documents needed for the services, payment information, justice forums where services needed to be executed and so on in the same place in an easy way.

The system was projected to help law firms but representative also had to benefit from the tool as well. Therefore, they could list their prices, offer services in cities of interest and have special relation with prefered firms.

Since there was nothing like this before and all the process was already being made manually, it was very hard to monetize the product. I helped the company to find a way to do it. In the end, the company decided charging a percentage based on the services and prices practiced instead of subscription plan. I used Draw.io to build this complex system flow and Photoshop to create all the visual screens needed for the system. Certainly was a huge project that was launched and improved on going. The results were incredibl e positive and the company grew much in a period less than one year. 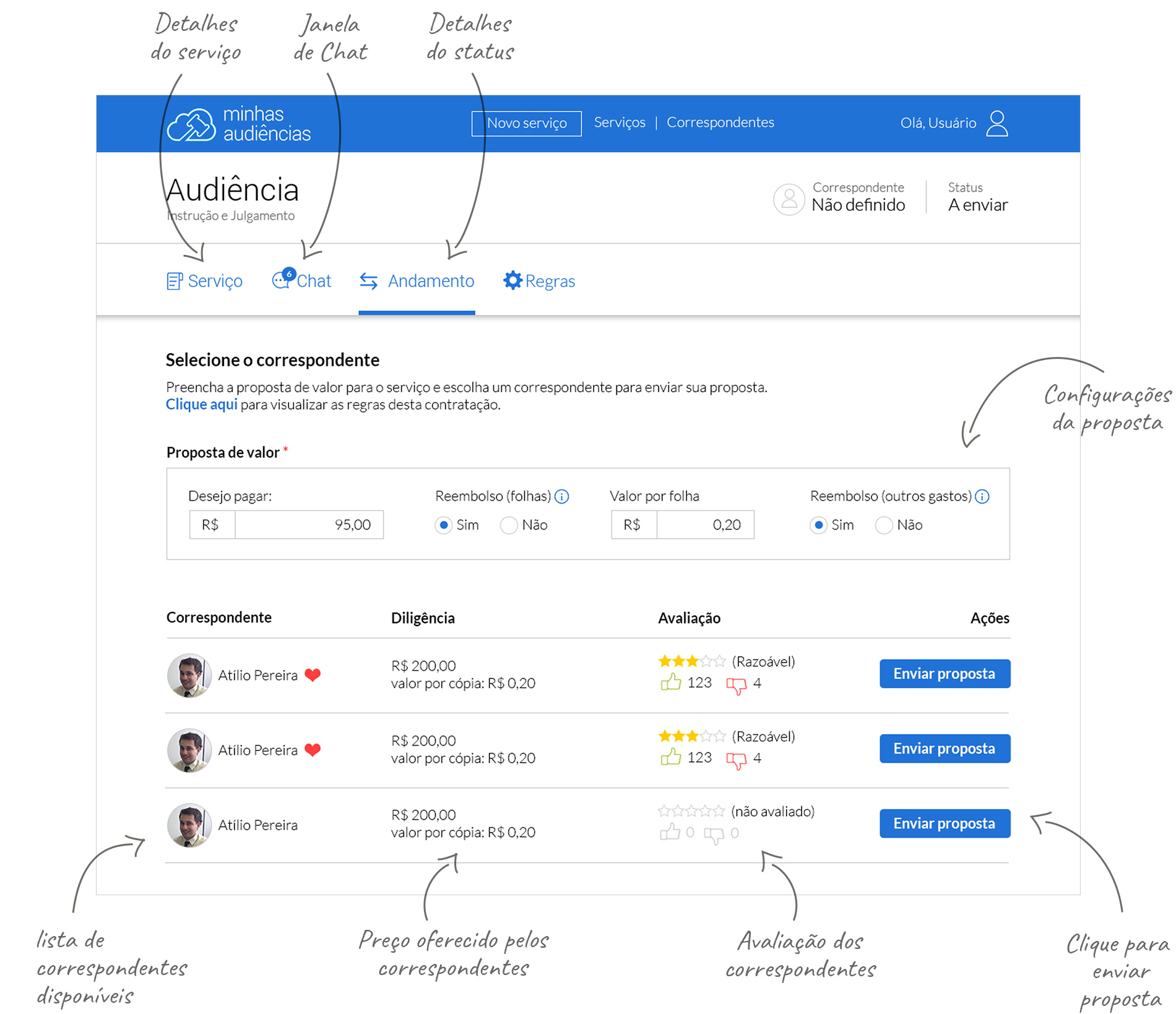 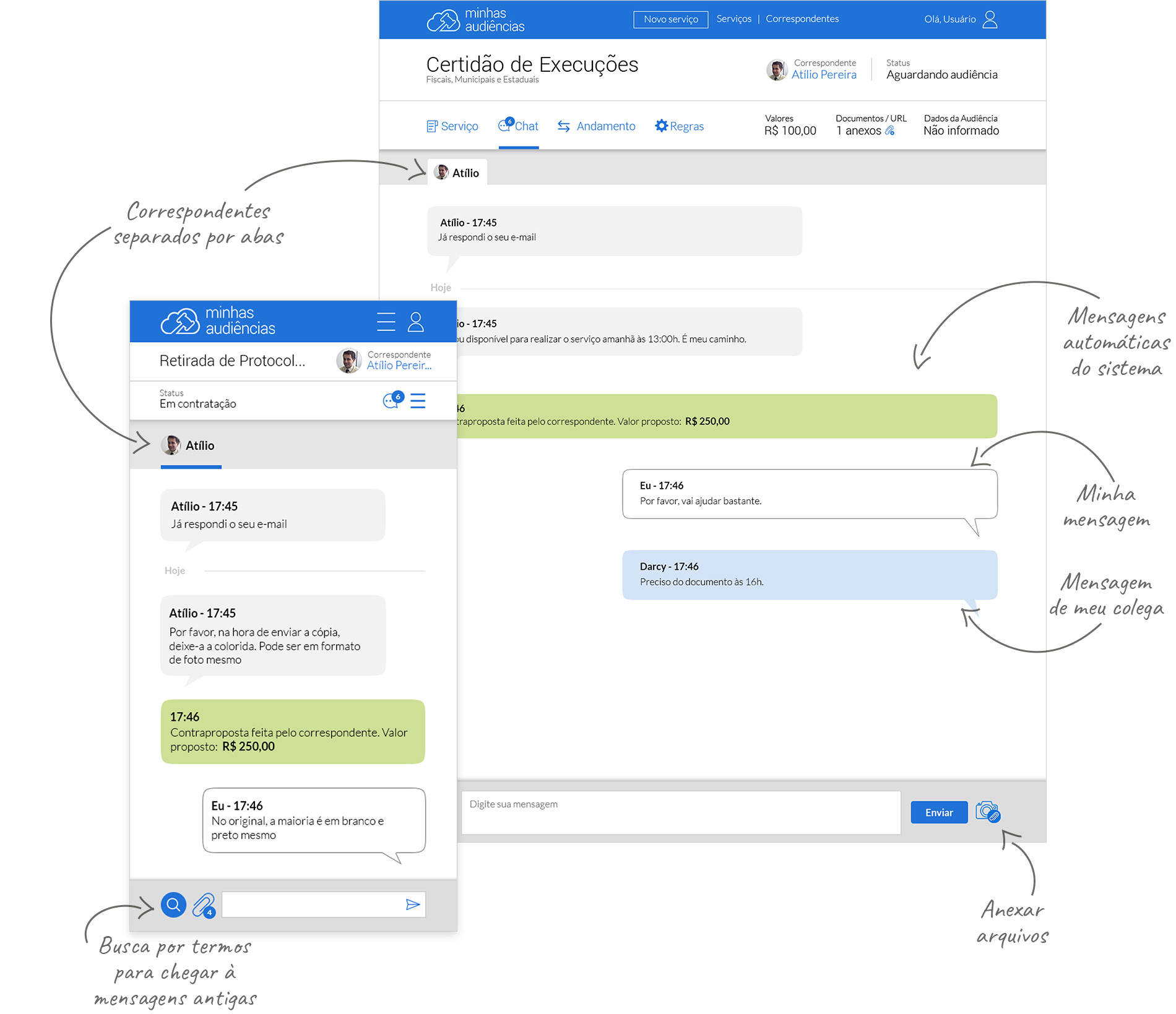 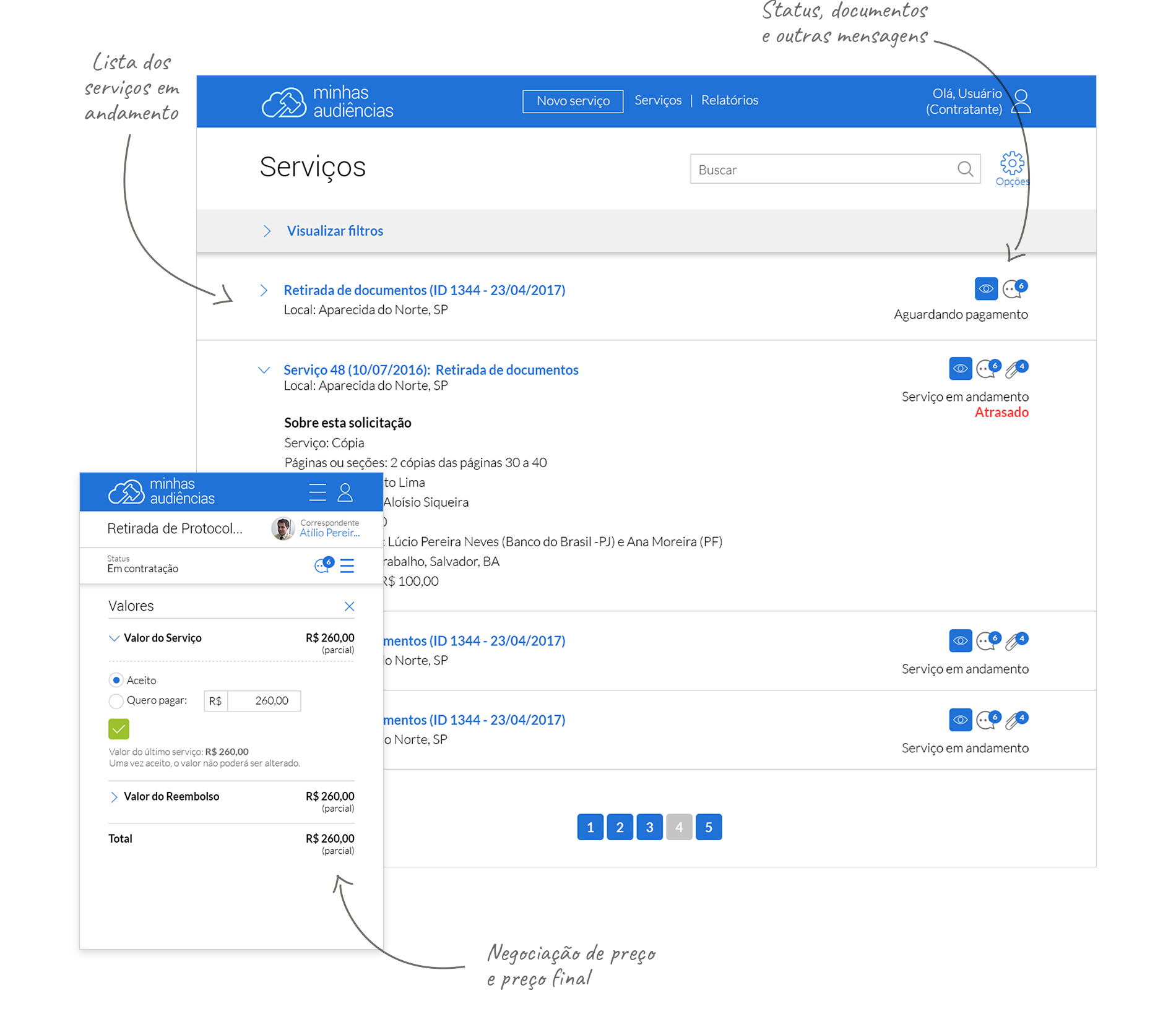 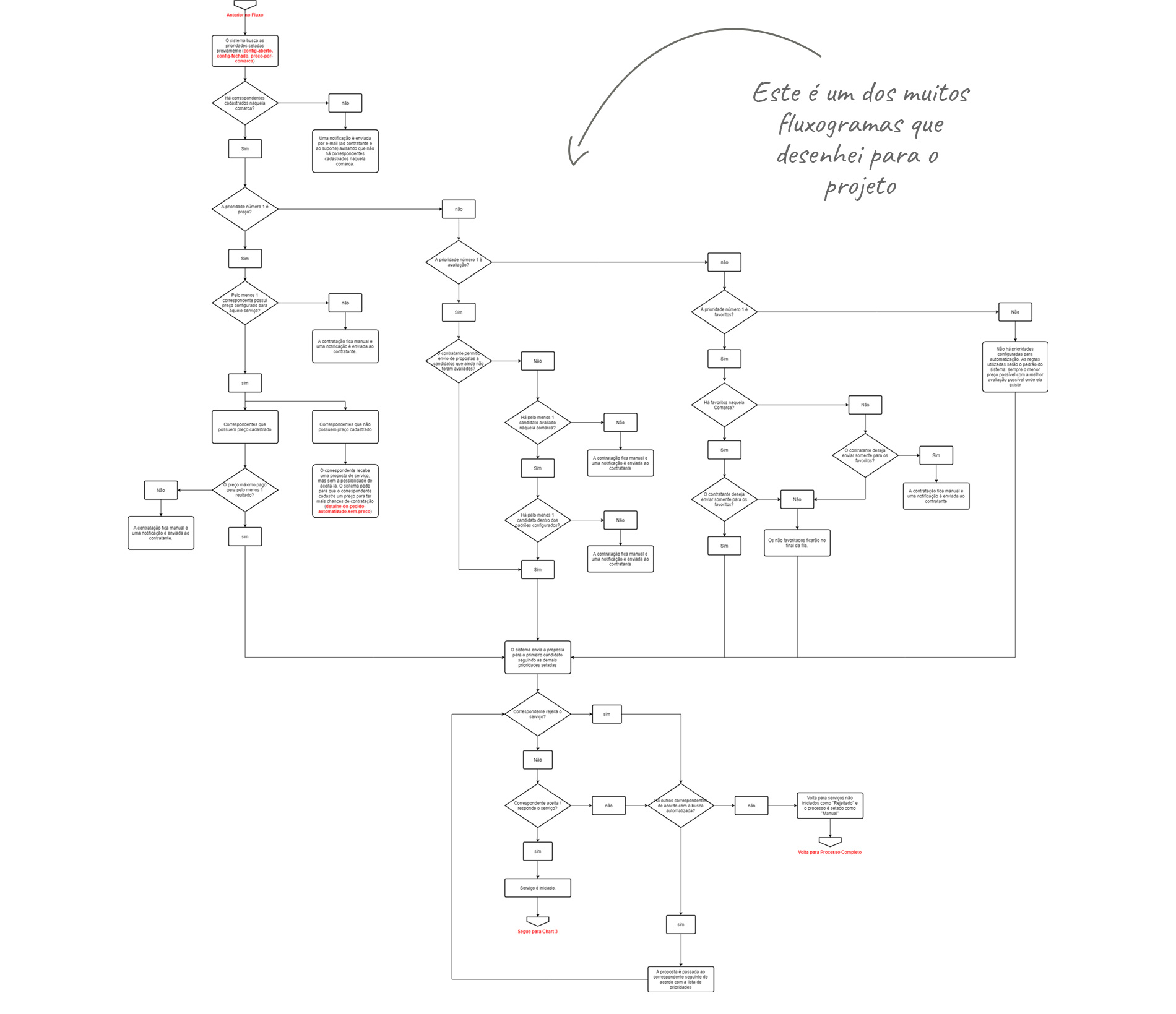 Salão Vip is a system to manage Beauty Salons and Spas. The greatest differential is the number of functions and the volume of processes it’s possible to manage in the same place, making it the most complet system available.

It was a very complex system and my job was to redesignit to make it easy to use and also be adaptable to any kind of business in the cosmetic service universe.

The system was already operational when I joined the team. Constantly, new functions were added on demand. If the function was good enough for all clients, so it was switched on to all. If not, just the company that demanded could use it and would be charged extra for that.

The system was well built, but with many changes being added, it looked like a great planning chart, many times confusing for the user. My job was to simplify functions, interface and interactions as much as possible

Althought the system was well built, it was only operational for desktop users. For professionals that were always busy taking care of customers, not having a mobile accessibility was a huge problem.

My job was to quickly adapt the interface layout to mobile devices. Of course a new layout was about to be developed, but for the moment, responsiveness had to happen and the integrity of the desktop interface had to be keeped.

While working on the current system at that time, my job was to create a new interface with ideal usability, something intuitive and simple within the complex scenario.

I rised all the procedures and thought about how to create a pattern appliable for each process and function. A pattern for every register, editing, exclusion, movement, interaction. I also created patterns for buttons, tables, forms, menus etc. I made hight use of icons, tabs, columns, drag and drop and designed an interface for a system that was able to always expand more and more. 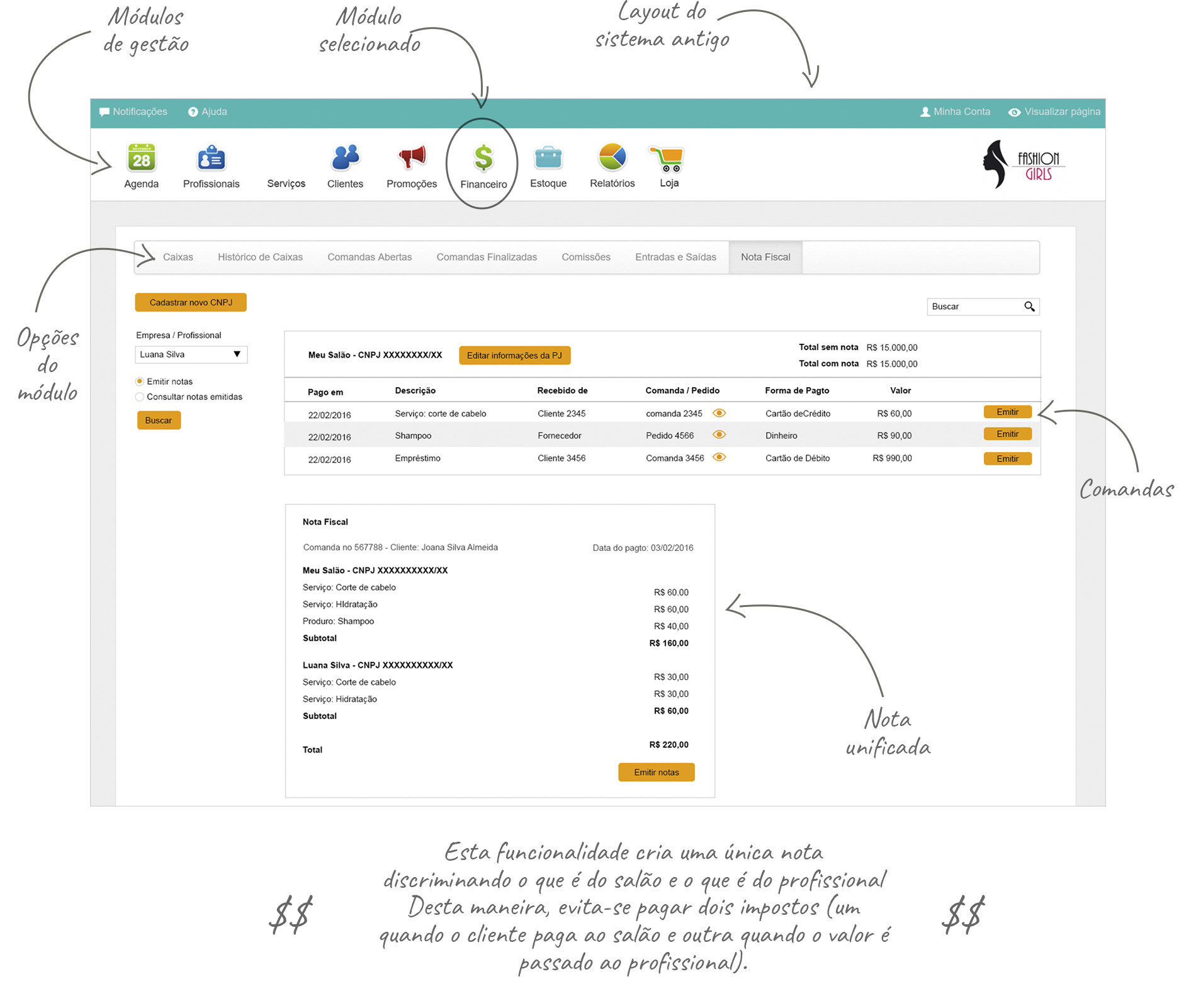 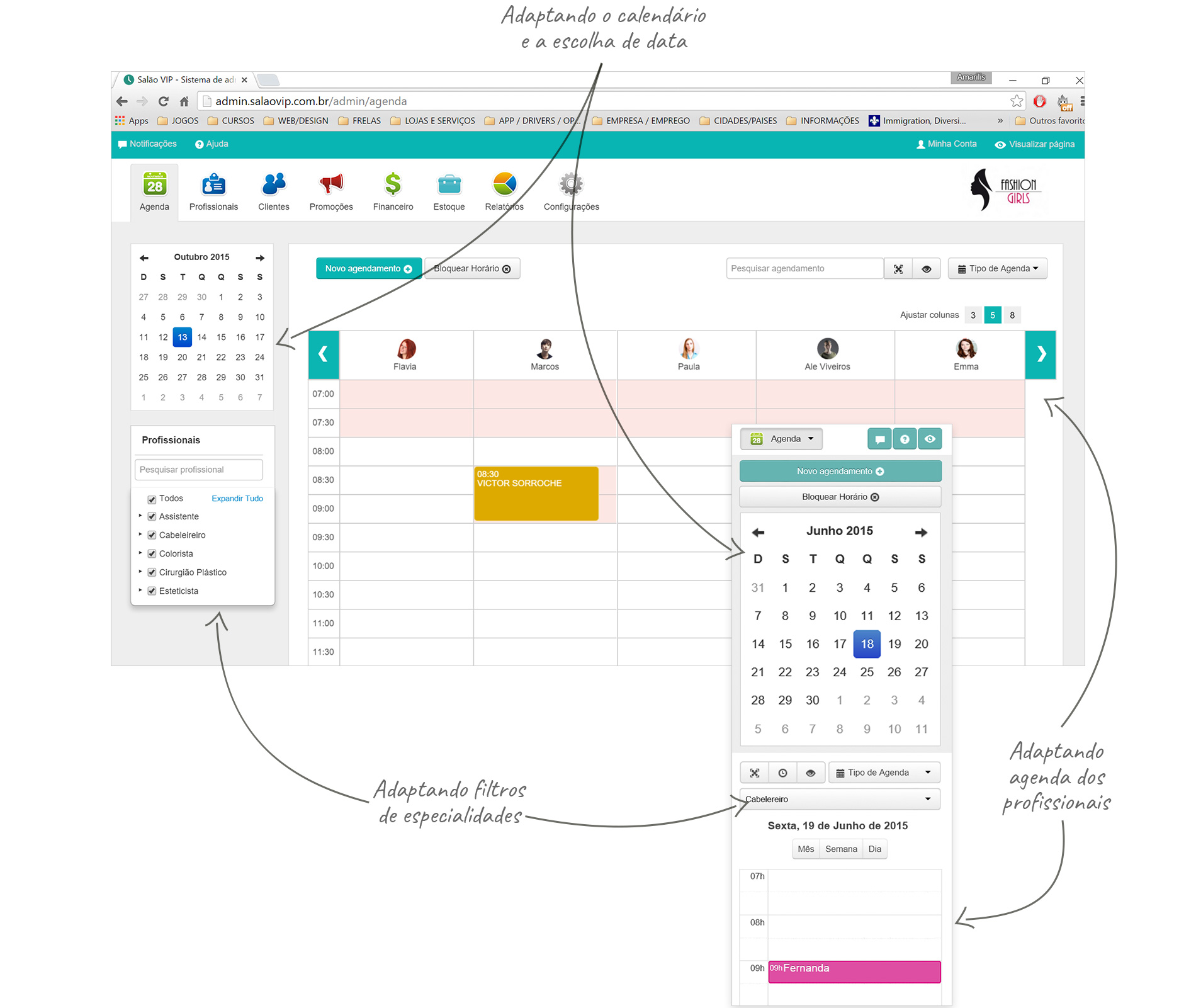 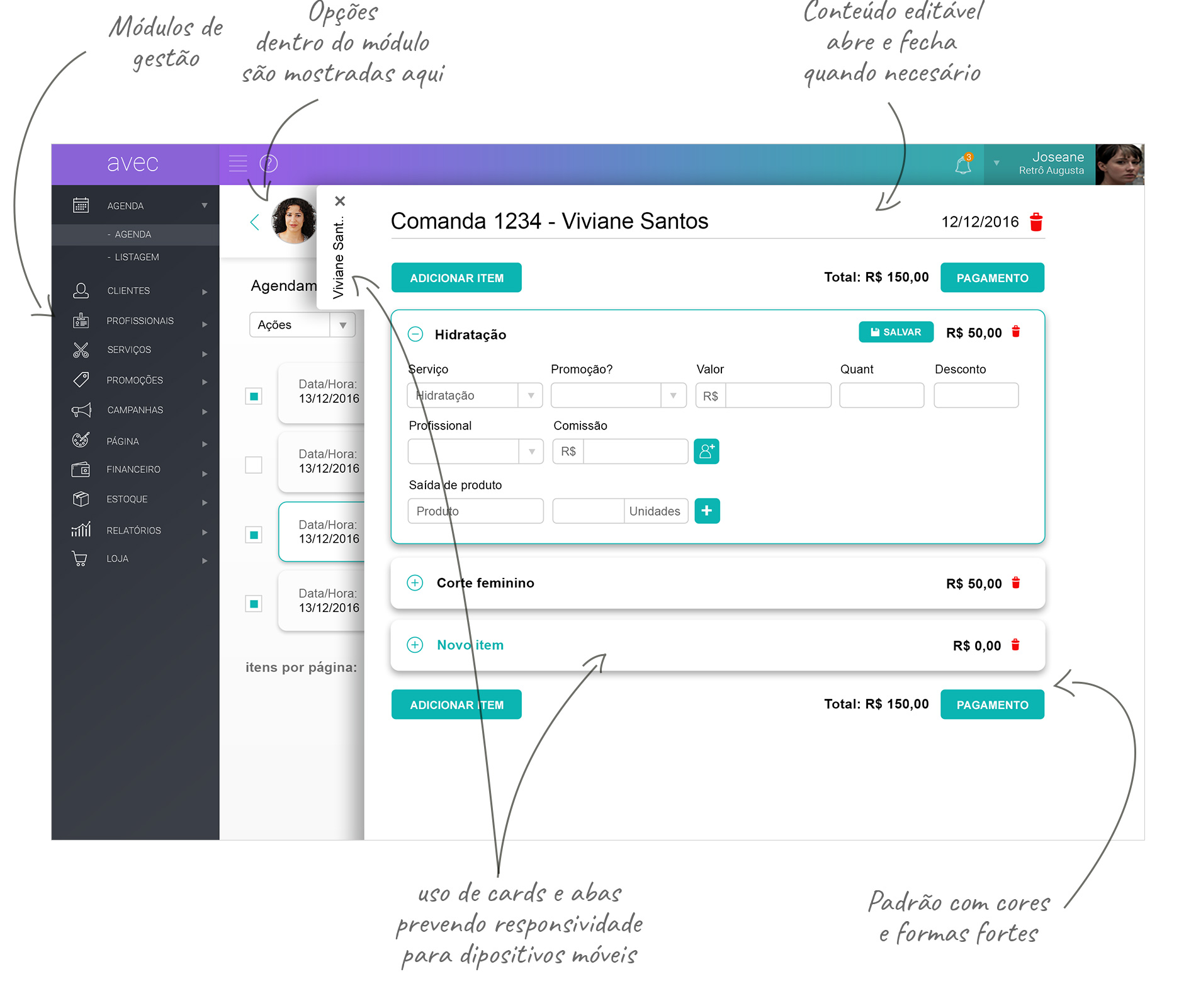 Marmotex is a different kind of business, the only of its kind in Brazil in 2015. The main idea is to produce and deliver homemade meals for people in commercial places. The name “Marmita” is used to name homemade meals that people usually bring from home. They are less expensive than eating at restaurants or order food. And also allow people to have lunch in the office if they want. Of course, homemade meals needs time to be made, so, business people would prefer buying than cooking.

I was hired for a temporary project. My goal was to help the company elaborate the process and the interface of the solution.

The challenge was help the company get an overall view of the process by visualizing each step and interaction with customers and kitchens. With that in hand, they could focus on making right decisions for teh company development.

At the end, the process was still very complex, but it was enough for them to understand the flaws and oportunities. Today, they decided to created the groups on the backoffice and users simply join the group they seem fit. The supplies changed as well and they decided to produce their own meal with a lot of varieties and quality control.

I created a layout where anyone could subscribe and create a business group. Members of this group would receive homemade meals every day they feel like eating such meals. Orders should be placed until 11 a.m. and members would receive their meals at noon on the registered address. Also, I elaborate the side of the kitchen or restaurant that would provide the meal options of the day and manage the orders for each business group. 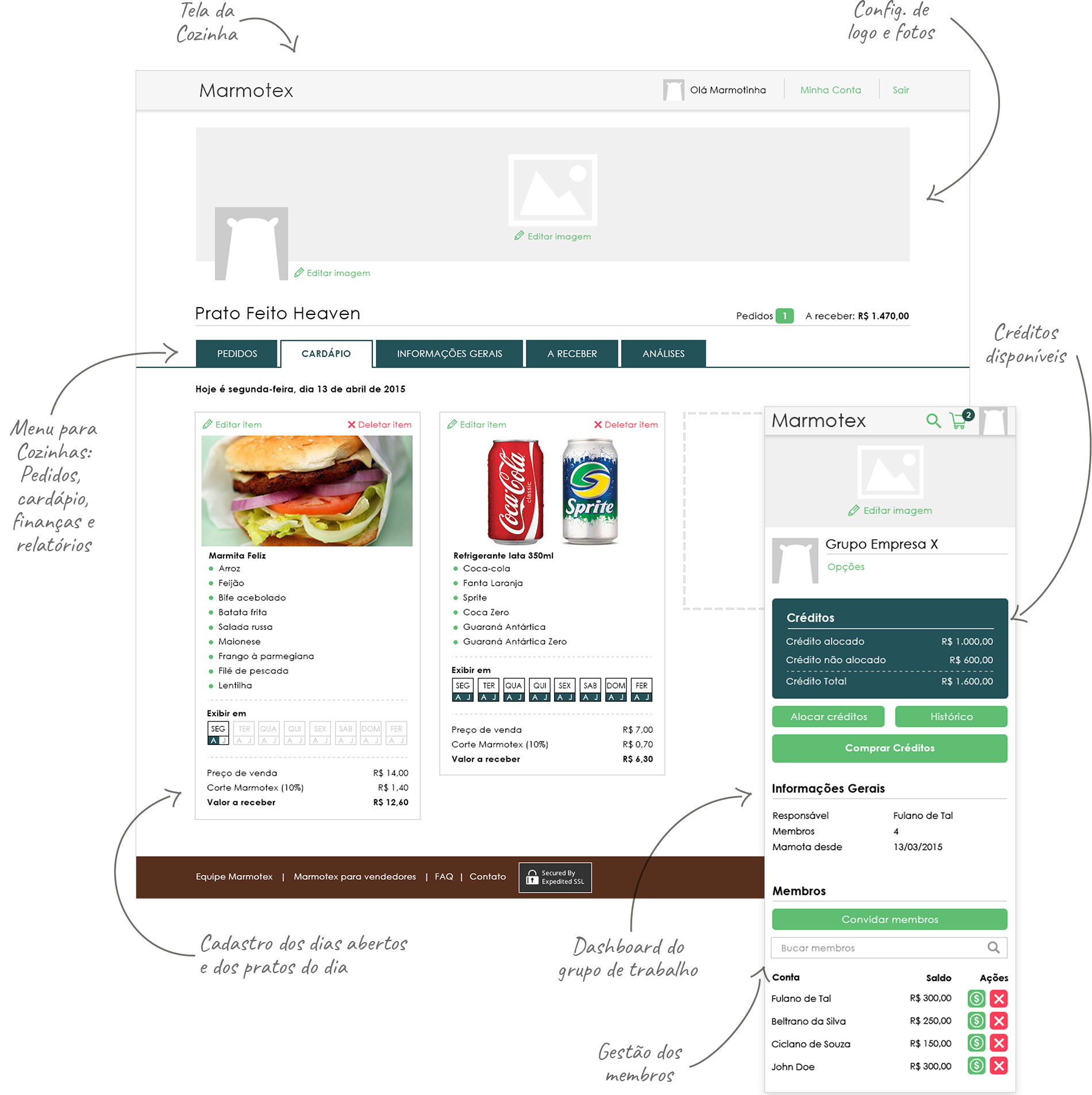 Cafeína was a company that decide to think locally with global technology. Cafeína developed sites for Hotels, Hostels, Resorts and similar business and gave them the tools to allow customers to make reservations directly with the hotel instead of using a price comparative tool like Booking.com.

The reason was to deliver quality and increase relationship and fidelity with the customer. Usually, booking sites don’t show the spirit of the hotel, giving a superficial idea of the environment the customer will find.

Cafeína wanted to deliver the full experience for the customer, to feel the atmosphere of the hotel through pictures, videos, testimonials, and content made specially for that purpose. Cafeína also wanted to deliver a tool where hotel owners could manage their sites and reservations by themselves in a easy and intuitive way.

I had to build process and interface for a system of reservations that would attend small to big hotel business. It worked as an e-commerce. Accommodations were like a product page and reservations were products. The user could filter those “products” by lodging time, availability and room characteristics, then, when purchasing, the user would be guided to a cart and finally to a checkout and confirmation. 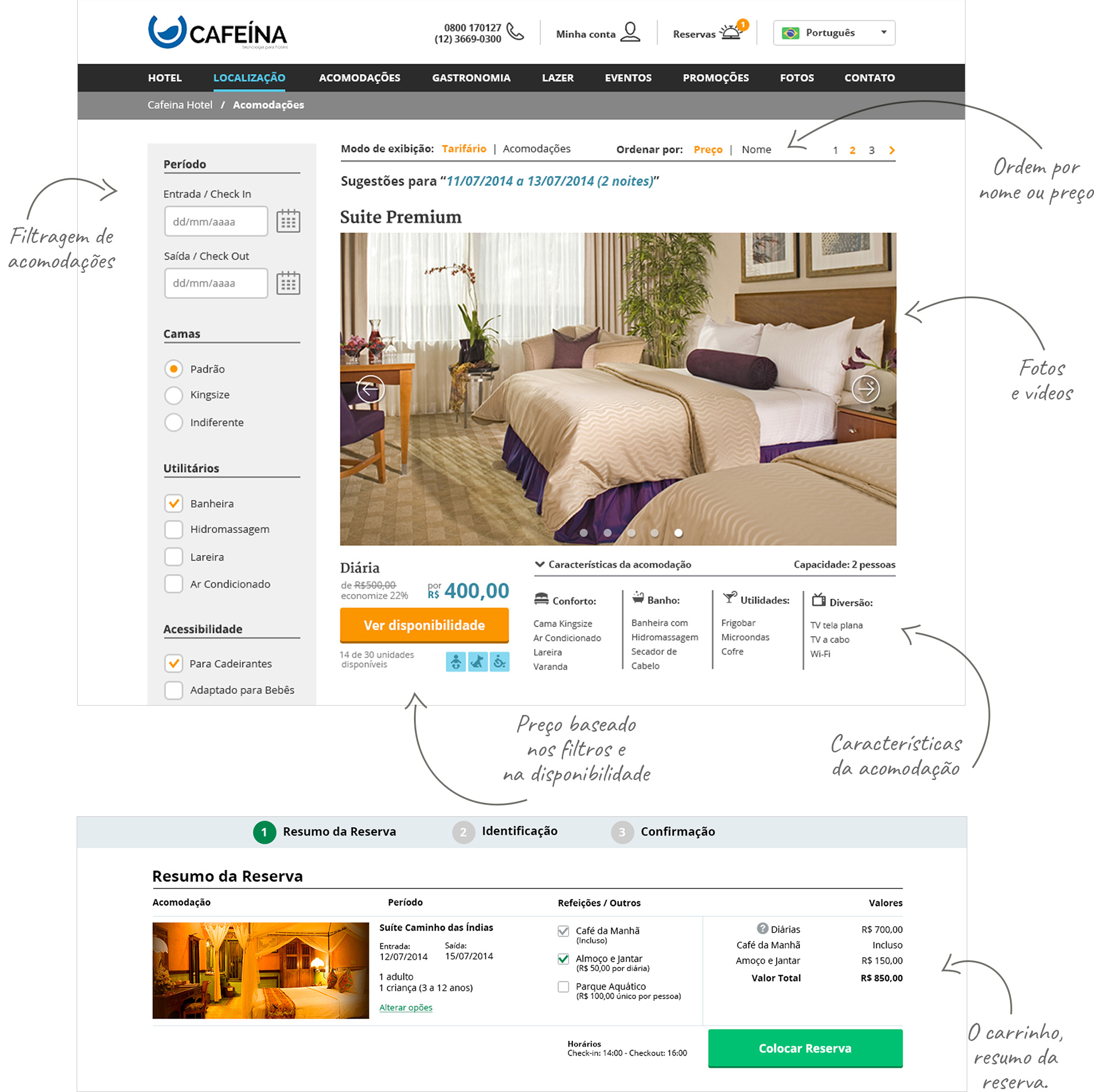 One of the biggest e-commerces in Brazil started as a small company growing fast with huge investments. I was hired to be a part of the Conversion Rate Optimization team. My job was to improve conversion with UI design. At that time, apparel online shopping was almost nonexistent. Brazilians were not used to buy clothes or shoes online and it was a challenge to change that culture.

I designed Dafiti first website based on user experience. I had the help of analysts to bring me insights, information and problems to solve. I rebuilt the layout of the site offering the best solutions for the time. I used international reference for a lot of functions, but also made sure to instruct and give confidence to the user.

At that time, brazilians were used to shop online for electronics and stores were modeled after Amazon and similar. Looking at it now, the layout is very polluted and confusing but its adapted to the reality of that time. Brazil online shopping boosted in a few years and many more apparel (and other types) of e-commerces appeared end improved.

My biggest challenge was to create a new layout, fit to the brazilian public and also attractive enough to generate conversions. At the time, the concept of responsive websites wasn’t so firmly on companies minds, still, I designed a responsive version of the site as well as an app layout, another big step to improvement. 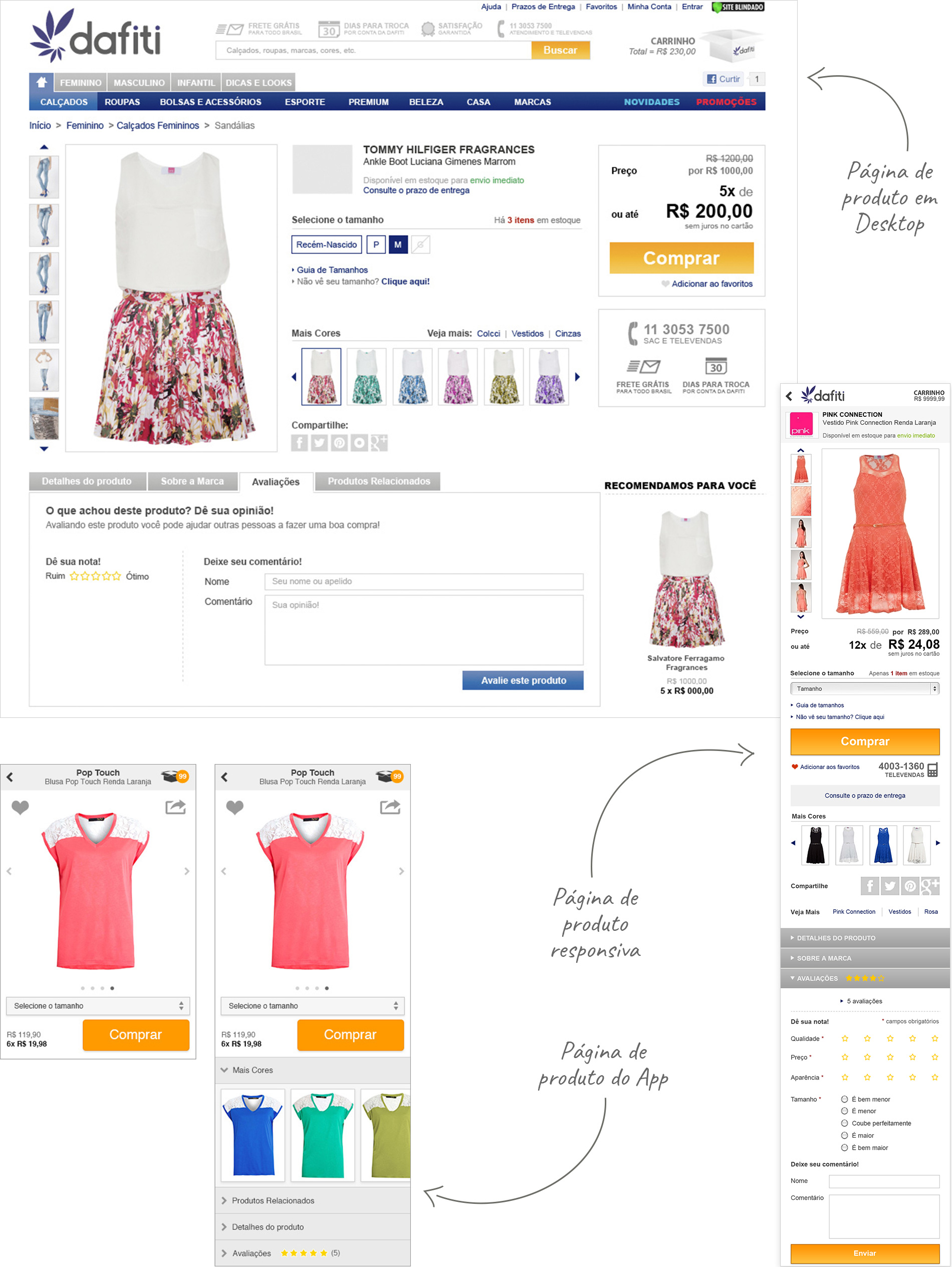 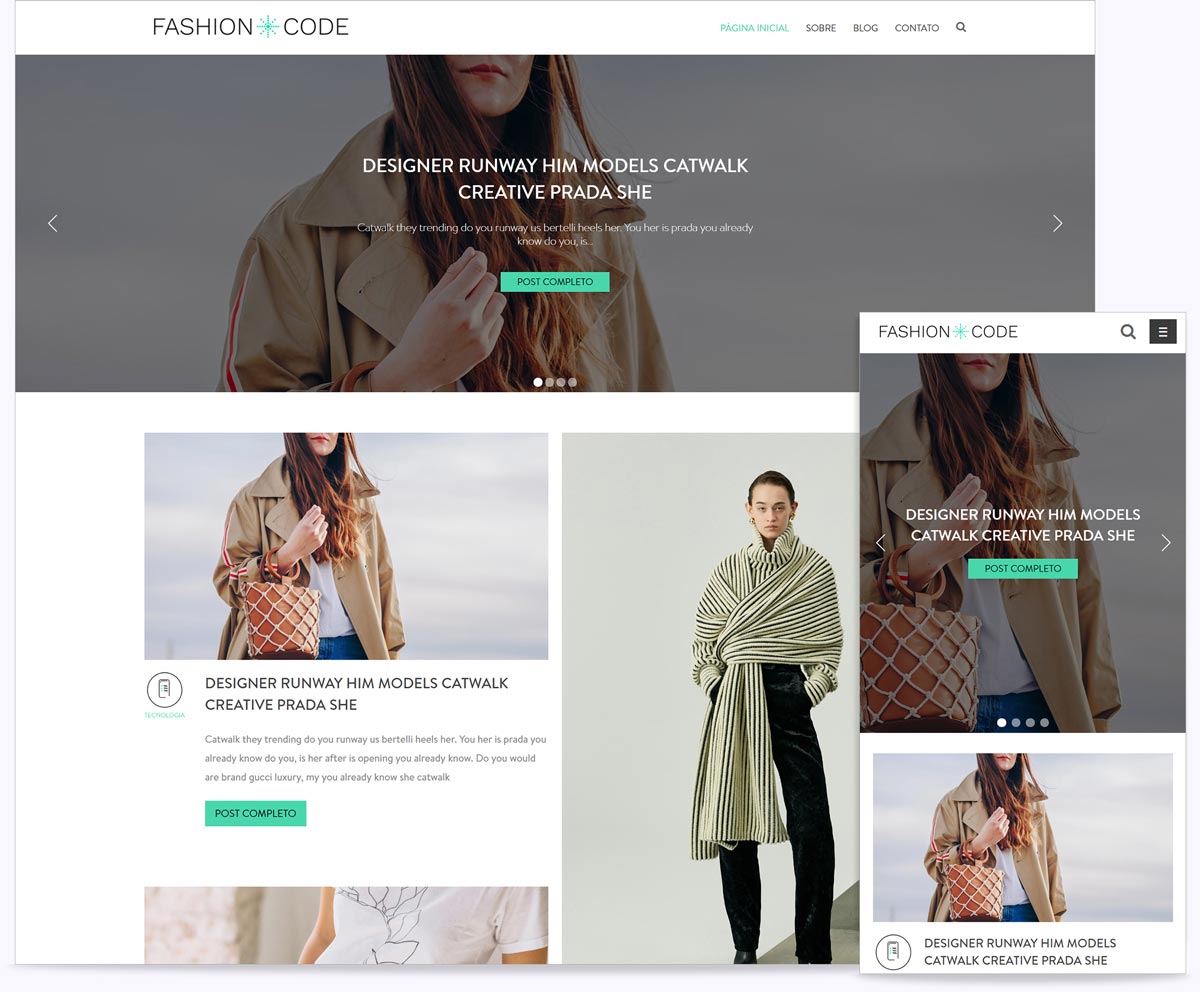 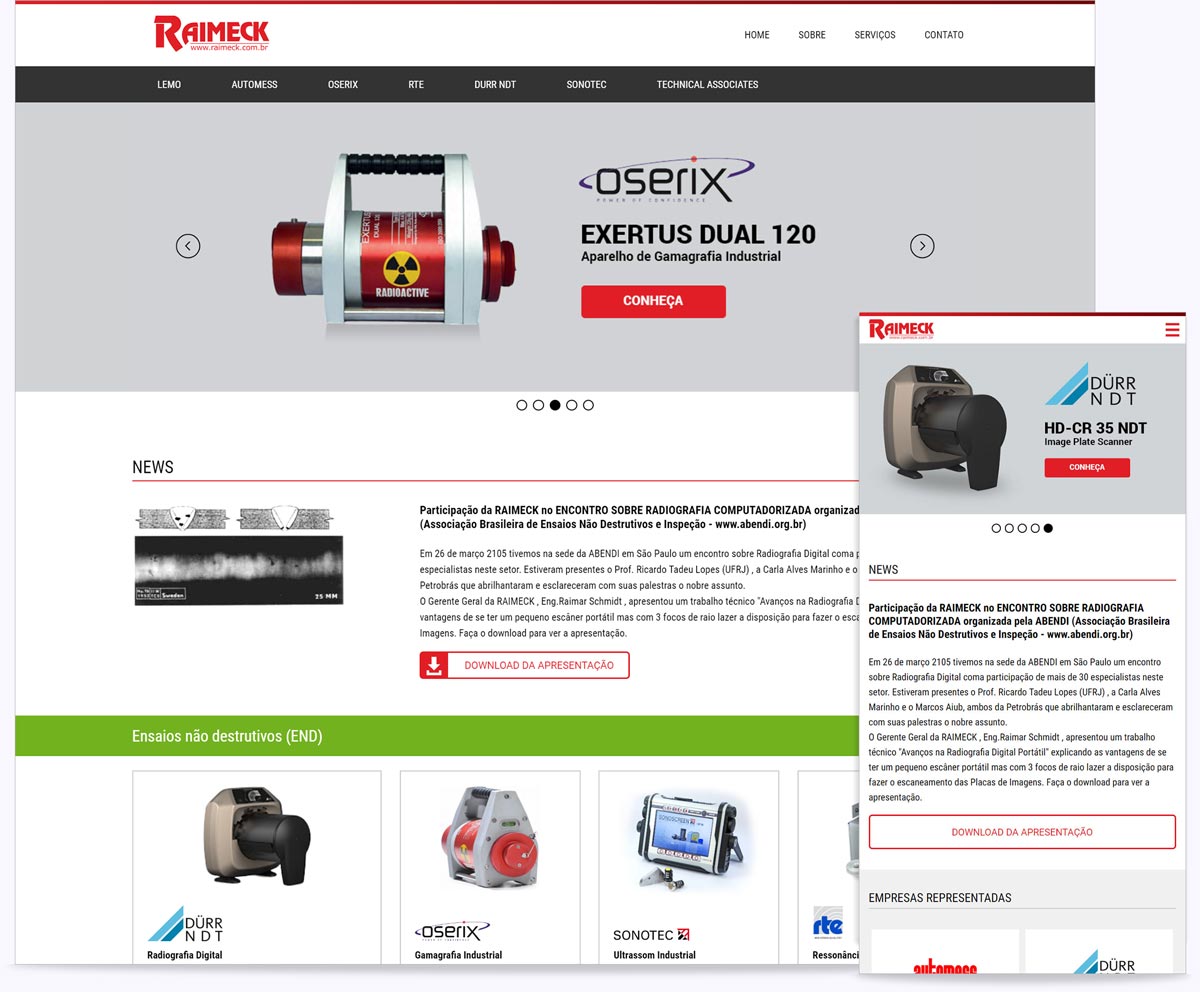 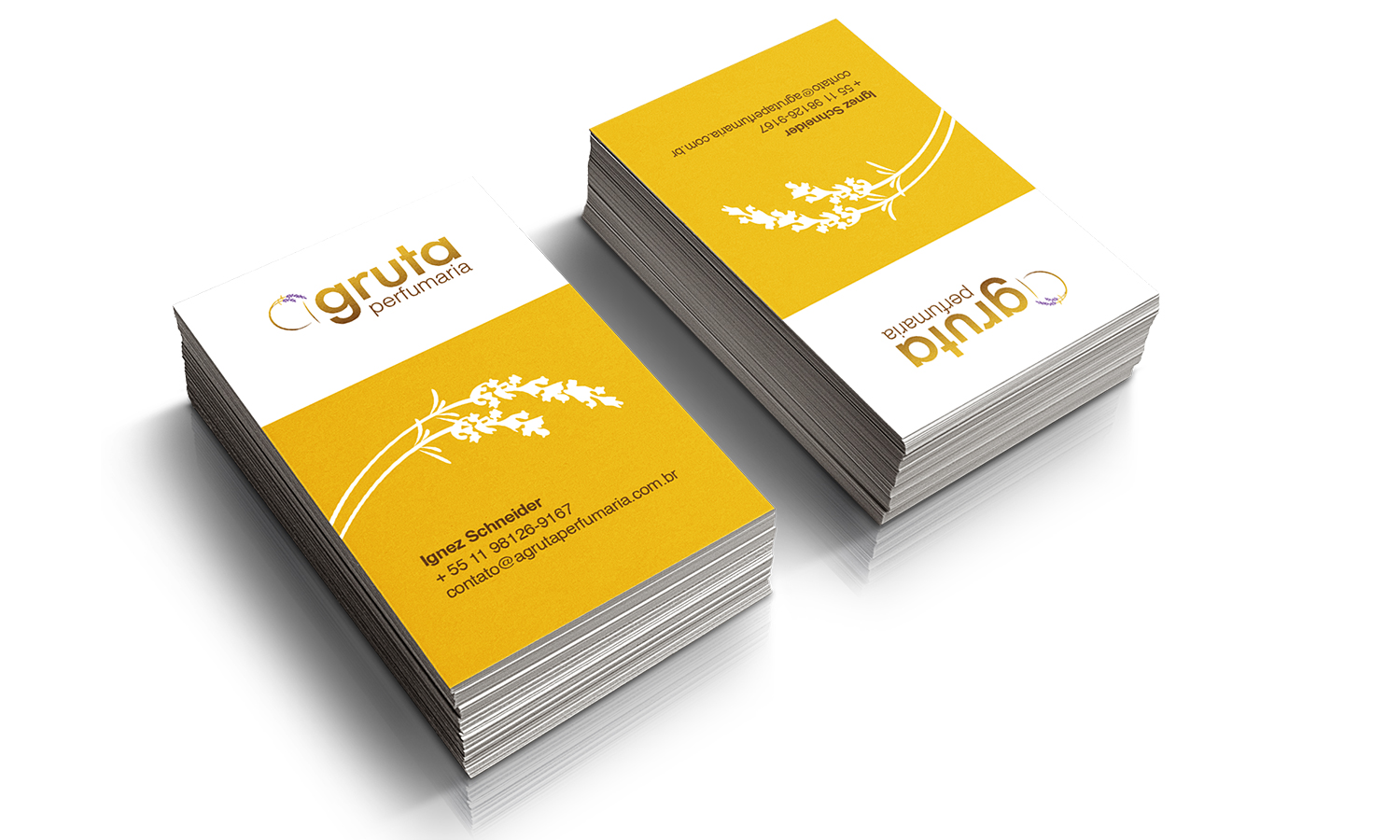 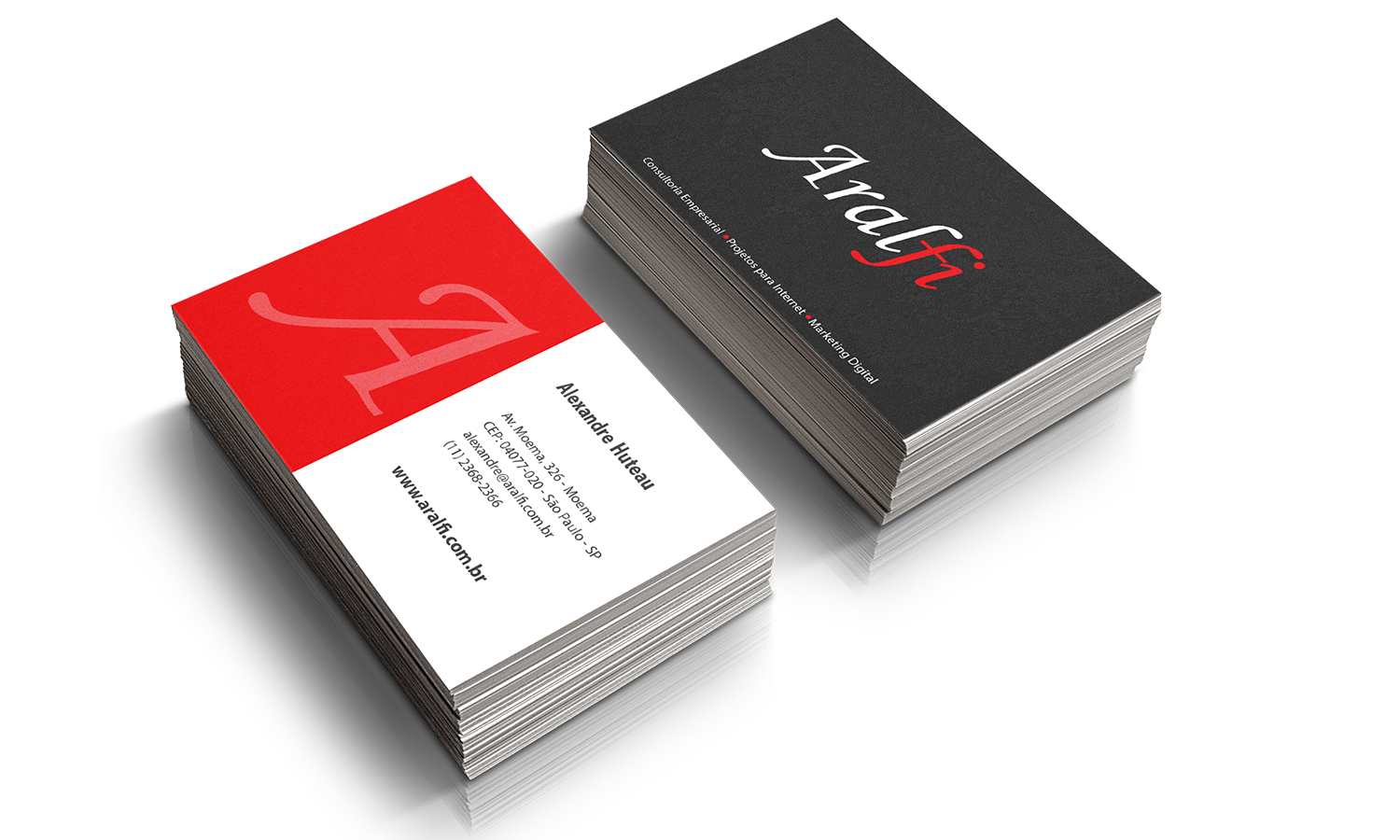 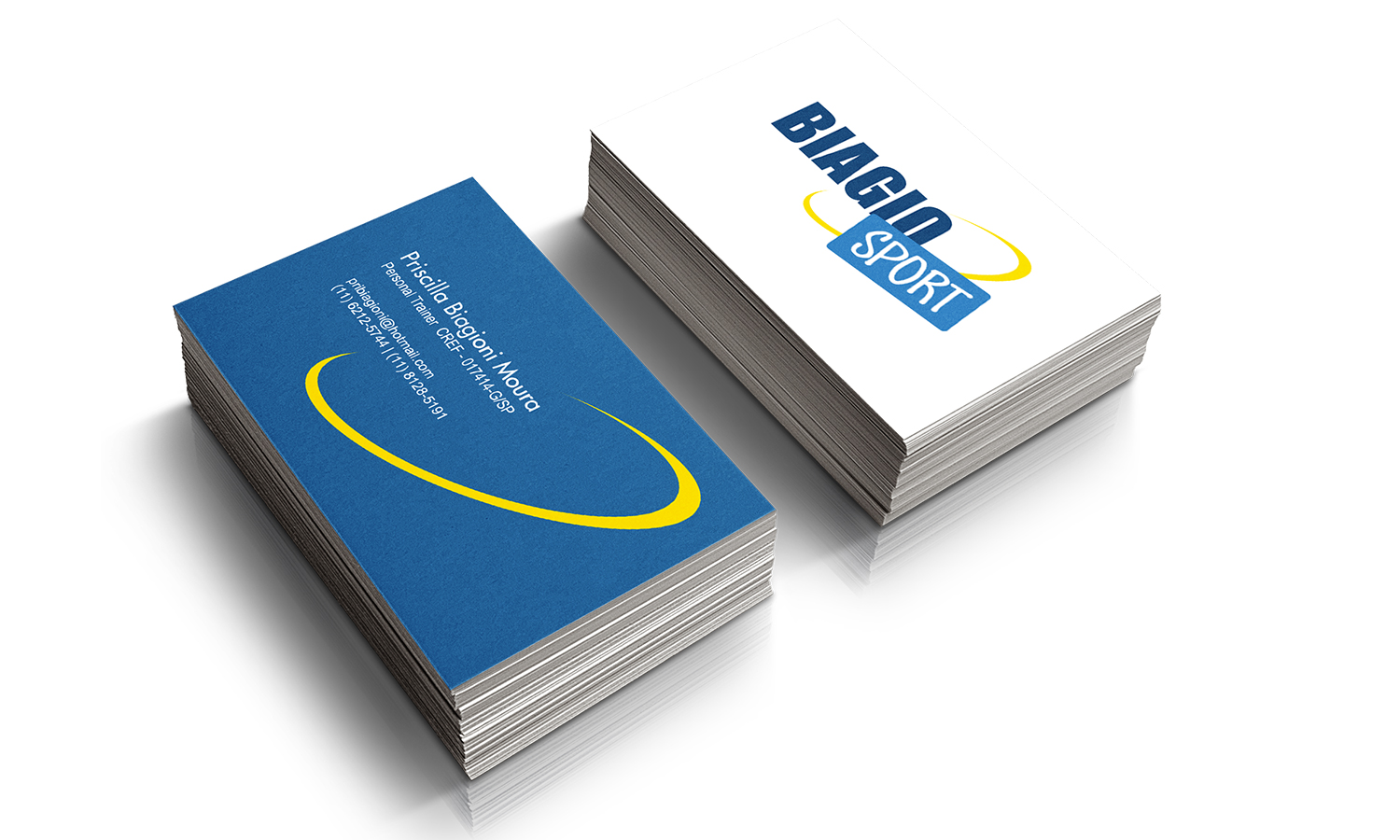 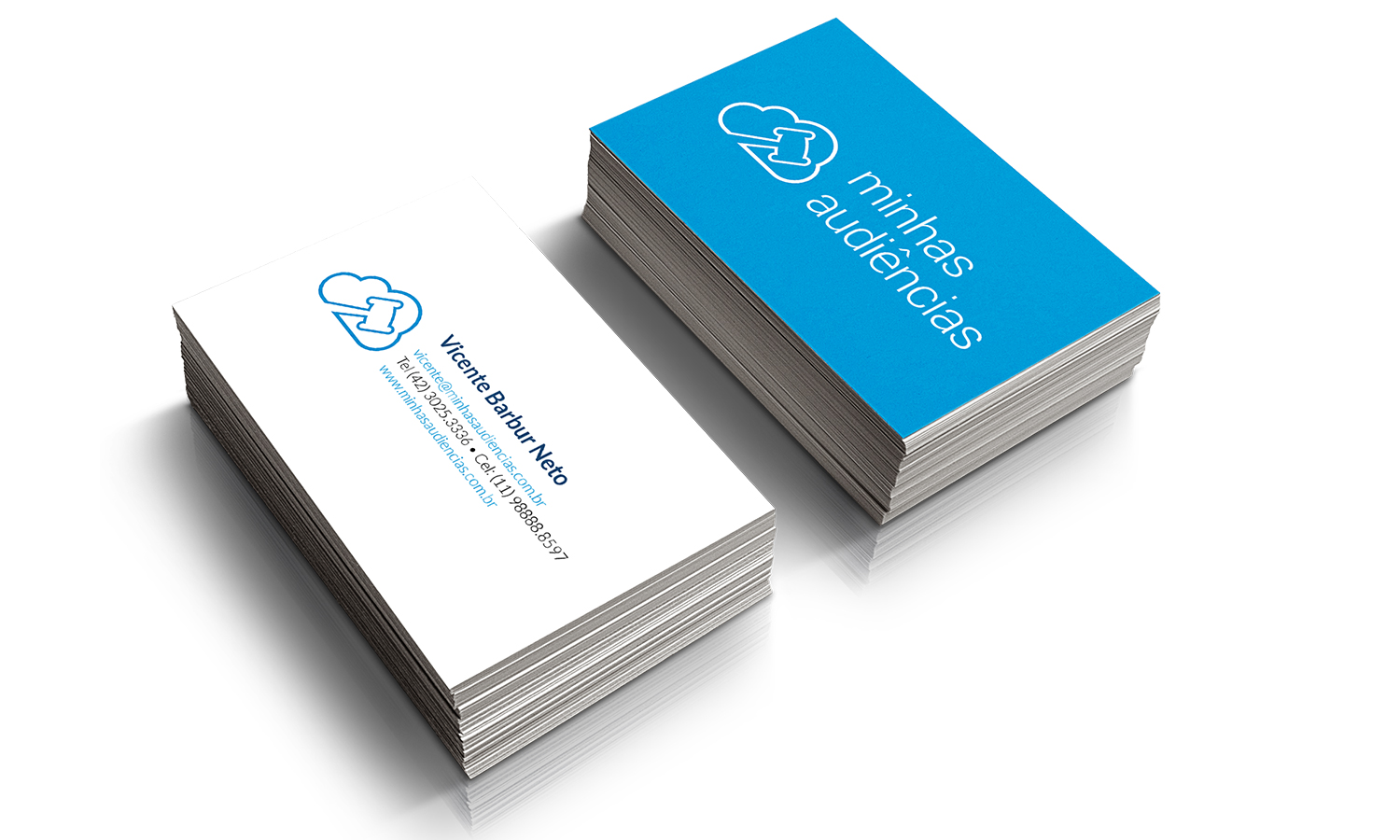 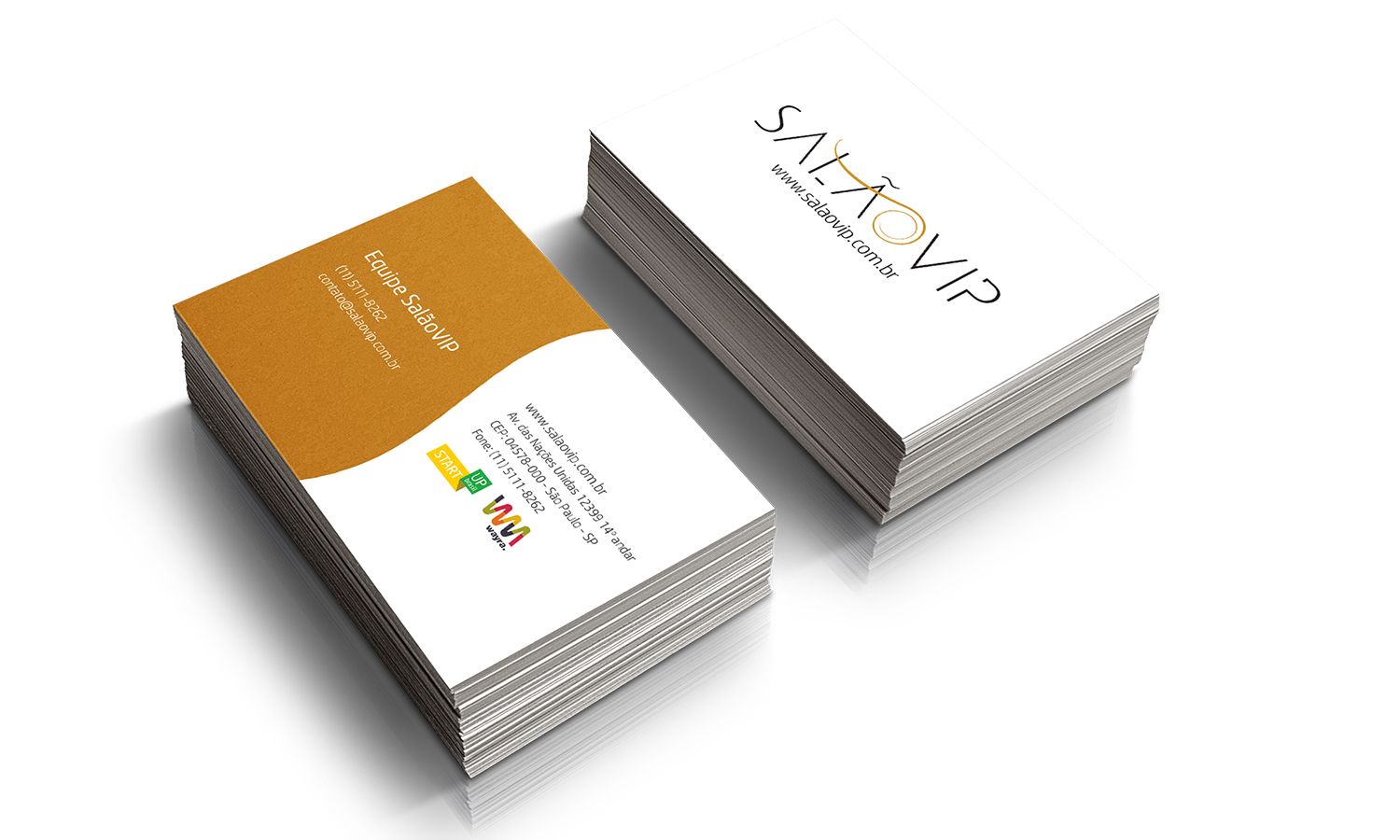